100 Days Until Totality! 88 Days Left – What is the Difference Between a Lunar and Solar Eclipse? 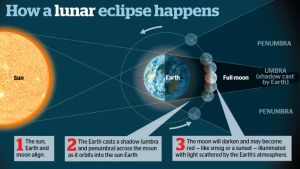 Lunar eclipses occurs during a syzygy alignment where the Earth is between the Sun and Moon. The Earth blocks light from the Sun, casting a large shadow behind it and onto the Moon. As the Moon travels through the Earth’s shadow, it will darken and appear to go through its monthly phases in the span of only a few hours. If you have ever observed a Lunar eclipse, you may have noticed during the event the Moon turns red. This is often referred to as a “blood Moon.” Blood moons are caused by sunlight travelling through the Earth’s atmosphere before making it to the Moon. Our atmosphere is not very good at absorbing red colored light, so it passes through while the other “bluer” colors are absorbed into the atmosphere. This is also why our sky is blue during the day, and why sunrises and sunsets appear red. Unlike a solar eclipse, lunar eclipses also last for much longer and can be viewed from the entire dark side of the Earth, due to the large size of the Earth’s umbra.