Astrophotography on a Budget

Astrophotography can seem like a daunting hobby to jump into. Indeed, there are definitely learning curves to overcome, but if it’s something you’re interested in pursuing, our astronomers are always happy to help you along in your goal to capture some deep sky objects with your camera. To help you get started, I’ve written up a simple guide to help you get going!

The Camera (of course!)

Naturally, the first thing you’ll need is a camera to photograph the night sky with. Though many options exist, we’re going to stick to the more budget-minded route since that’s where most people will be coming from. The most accessible option would be to get a DSLR camera, such as a Canon Rebel. Under normal, daylight circumstances, both Canon and Nikon reign supreme in the field of photography. With deep space photography, however, Canon has embraced the market much more noticeably than their competitors. This is primarily because Canon sells a modified version of their 60D camera called the 60Da. What’s the difference? (Besides the ‘a’?) Every camera comes with a filter that covers the sensor that makes the sensor more sensitive to visible light. The 60Da comes with a modified filter that is able to "see" more light than the standard filter (or your eyes), specifically Hydrogen-alpha particles. Hydrogen-alpha particles are important to astrophotography because they make up a significant amount of matter in many deep space objects. If you already own a camera in the Canon line, you can have that custom modified to have that filter replace the standard filter since the process is relatively simple and routine (though very tedious). Keep in mind though that this will void any warranty on the camera.

For my own astrophotography, I bought a used Canon Rebel T4i and sent it off to Hap Griffin to have him do the modification. He’s done hundreds of modifications and only charges a small fee added onto the cost of the filter. Given what’s involved with the modification, I found it well worth the price.

Of course this could be enough to get you started with some wide shots of the Milky Way Galaxy, for example, but to really zoom in and get some deep space objects, you’ll need a way of moving your camera with the stars. You’ll discover soon enough that the stars move much quicker than you think, and getting a crisp shot zoomed in on an object simply won’t work with your camera fixed on a tripod.

To remedy this, three solutions are available to allow your camera to actually pan with the stars, giving you the opportunity to take as many shots as you need of any visible object in the night sky.

For those with a limited budget, the Vixen Polarie is a great option that will mount on top of a tripod. Your camera then attaches to the device which keeps it turning against Earth’s rotation so your camera stays fixed on the stars.

A couple of key specifications to keep in mind: it will only allow up to seven pounds of weight, so mounting heavier lenses probably won’t be a good idea for this particular unit. The Vixen Polarie will shine however, with lighter, prime lenses.

The battery life is also an important item to keep in mind. At near room temperature, the Vixen Polarie will last for roughly four hours on two AA batteries. On colder nights, that time will drop of course, not leaving you too much time to capture fainter objects.

For more information about the Vixen Polarie, visit their website here.

For those willing to spend just a bit more than the Vixen Polarie, the iOptron Skytracker is well worth the extra money. The setup and operation is roughly the same as the Polarie, mounting onto a tripod, but the iOptron Skytracker supports 7.7 pounds and will also last for 24 hours at near room temperature on four AA batteries. Again, that time will drop in colder weather, but in that category, the Skytracker beats the other two options listed here.

This is the unit that I use and have been very pleased with the overall functionality and usability of it.

For more information on the iOptron Skytracker, visit their website here.

The AstroTrac retails for about twice the price of the other two options, but is solidly built, lightweight, and combined with the wedge (sold separately), can support the heaviest of lenses for reaching deeper into space, supporting up to a whopping 33 pounds. Its battery life on eight AA batteries is 10 hours, which isn’t too bad, but you’ll definitely want to look into rechargeable batteries for this device. For the price, its features and functionality are unrivaled. Polar alignment is also significantly easier than both the Polarie and Skytracker, something that can easily take a few nights to really understand.

For more information on the AstroTrac, visit their website here.

Each device will have to be polar aligned, that is, aligned with the north star, Polaris. This is to ensure accurate panning and rotating. This step can be a learning curve in itself, and each device handles it slightly differently. The AstroTrac handles the alignment the simplest and smoothest, while the Polarie and Skytracker are a bit more cumbersome, but can still get the job done well enough once the quirks of each system are learned (ie, tightening knobs causing the alignment to shift slightly). In order to successfully align each device, a polar scope or similar tool will be required to hook onto the unit, and each will have instructions on how to correctly align the unit.

Many people instinctively want to get their best telephoto lens and zoom all the way into an object. After hours and hours of exposures, what they’ll find is that there’s a slight inconsistency found throughout all their photos, ruining the entire night of work. The reason is that as the temperatures begin dropping over night, the temperature changes will cause the lens itself to "creep" slightly throughout the night, changing both the focus and zoom. To avoid this, most people recommend using a prime lens, meaning, the lens itself is only one fixed focal length. A few popular examples are 50mm, 105mm, and 400mm. One trick I’ve found to avoiding this is to also use Canon’s 100-400mm L lens, which is one of the few on the market that can be "locked" to a certain zoom anywhere in its range. This has so far proved to be an effective workaround to the "creeping" which affects other telephoto lenses. 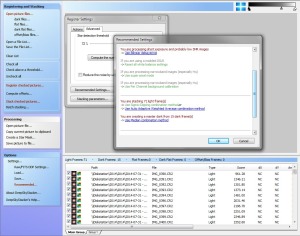 To capture your image, you won’t be taking a single exposure. There would be too much noise to be cleaned up and if your polar alignment is only slightly off, you’ll see trails from all your objects. Instead, the system that works for most people is to take a series of individual shots and "stack" together in a program such as Deep Sky Stacker (discussed below). That way, if a jet or satellite happens to fly through your image, you haven’t lost hours of work.

I’ve often simply set my camera to 30 seconds, which is what most cameras will max out at before going to Bulb exposure where you can specify a longer length. How many exposures you capture is entirely up to you. You can get a nice image with 20 shots, for example, but the more you capture the more information can be brought out in the stacking process. Some people will even capture objects for multiple nights in a row throughout each night. This will give you the most detail and bring out the faintest objects.

Think you’re done once you’ve gotten a bunch of shots? Not quite. This is just one of many learning curves. To counter the noise that will built up in your stacked images, you’ll need a series of what are called Dark Frames. This can be 15 or so images with the camera settings set exactly as your other exposures, but with the lens cap on. In simple terms, this will simply let the post-processing software know what’s noise, and what’s supposed to be in the final image.

As mentioned, Deep Sky Stacker is the preferred image stacker for most amateur and even professional astronomers, and it’s free! There’s a vast amount of features and options, many of which you’ll never click on, but it’s best to give the Frequently Asked Questions a quick overview before jumping right in.

In astrophotography, the word, budget, can be a very relative term. All the gear and techniques listed here though, are the least expensive ways to get in on the fun. If you have any questions, feel free to leave some in the comments, or come out to a free stargazing event where we’ll be happy to answer a couple of questions. If you’d like a more personalized experience, we’re also available to do private astrophotography sessions with you as well.

One thought on “Astrophotography on a Budget”