Check out this blog post by Jackson Hole Traveler:

Beginning this Thursday, and every Thursday for the rest of the Summer, from 12:45-2:45pm Wyoming Stargazing will be offering FREE Solar Astronomy Programs out in front of Elevated Grounds coffee shop near the Aspen’s Market in Wilson. Come safely check out solar flares, sunspots, and other features on the Sun through our solar telescopes. You can even snap a picture of these incredible features through our telescope using your smartphone. Elevated Grounds will be having Happy Hour during that time and will be offering up some of their new drinks like Apollo’s Chariot. Don’t miss out!

This Sunday, March 1st, at 11am, Wyoming Stargazing will be offering a free solar astronomy program outside the Jackson Hole Children’s Museum. Please join us to check out sunspots and solar flares through our high tech solar telescopes.

Weather permitting, Wyoming Stargazing will be offering a free public stargazing program following Bill Nye’s presentation at the Center for the Arts this Thursday, February 5th, from 8pm-9:30pm.

We’ll be on the pathway that goes through the field to the south of the Center. Let’s hope for clear skies!!!

If you haven’t already heard the word on the street, starting at about 10:16am directly above Jackson, Wyoming on Monday, August 21st 2017 we’re going to have a total solar eclipse. I know it’s still two and a half years away, but that hasn’t stopped people from all over the world from booking hotels in Jackson for that week. I’ve personally received inquiries from England, Belgium, and the Netherlands, not to mention another dozen or so from folks all over the US. So, if you’re planning on coming to Jackson for the eclipse book your hotel soon because they are filling up fast!

Although there are lost of places around the continental US from which to view the eclipse, Jackson is poised to be one of the best. I mean, come on, where else can you go to see a total solar eclipse with a bald eagle flying over head, bison grazing in the foreground, 13,000 ft peaks behind you, grizzly bear, moose, and elk frolicking off to the side, and the howl of a wolf in the distance. Well, maybe not all of those critters at the same moment, but you get the idea.

The charismatic mega fauna aside, seeing the total solar eclipse is really the once in a lifetime opportunity. To help you out, Wyoming Stargazing has set up a new page on our website with all the information you’ll need to keep track of. The URL for that page is:

It’s under our Programs link in the main menu on the homepage.

Come and find out why Jackson should build a public observatory!

University of Wyoming Astronomer and Director of the Jelm Mountain Observatory, Dr. Chip Kobulnicky, will present a program entitled:

“Wyoming’s Skies: A Gateway to Life, the Universe, and Everything”.

In this pictorial presentation, Dr.Chip Kobulnicky will describe how backyard enthusiasts
can contribute to modern astronomy research while bringing the excitement of real science to any hometown or school. Arguably the oldest of the sciences, astronomy is humanity’s quest to understand what exists in the universe, how it works, and how the universe affects life here on Earth. Remarkably, astronomy is also the most accessible of the sciences, especially here in Wyoming.

This presentation is part of the monthly Jackson Hole Astronomy Club meeting. Coffee and light refreshments will be served. The event is free and open to the public. No need to RSVP.

There’s a great article in the JH News and Guide about TEDxJacksonHole. Look closely and you’ll notice that the cover photo was taken by none other than our own Mike Cavaroc, astrophotographer, board member, and webmaster extraordinaire–and why? Because he’s also giving one of the talks!

If you have a ticket, we can’t wait for you to watch him explain beautifully why the night sky is a benefit to us all.

If you don’t, well, the event is sold out but you can either get on the waiting list or watch it in the lobby of the Center for the Arts, since it is being live-streamed there. And then you can get dibs on looking through our telescopes!

Yes, Wyoming Stargazing will be at the event as well, doing solar astronomy during the entertainment before the event (at around 5 pm) and doing stargazing during the intermission and afterwards! We’d love to foster your own imagination with a look through our telescopes at the clear full moon expected tonight! And don’t miss Mike’s talk!

Are you excited for Jackson Hole’s first ever science festival at the Center for the Arts, Oct. 3-5? Wyoming Stargazing will be there!

On Friday at 10 am, after the welcome presentation in the auditorium, Sam Singer will lead a round table activity on Kinesthetic Astronomy, where kids will learn about the phases of the moon by putting on T-shirts and pretending to be the sun, moon and Earth.

On Saturday at 1 pm, Sam Singer will give a presentation on general astronomy called “Extraordinary Wyoming Skies” aimed at families.

We should also be around all weekend with our solar telescopes to watch the sun in the middle of the day, and of course at Stilson parking lot on Friday night to watch the stars as we do every clear Friday night!

There’s so much to choose from! Or just come join us for all of it! Look for us in the Black Zone for Astronomy and don’t forget to check out the other awesome speakers and events going on that weekend. Science!!

AMK RANCH — Insights on viewing objects in the night skies of Wyoming will be discussed Thursday, Aug. 21, at the University of Wyoming-National Park Service (UW-NPS) Research Center at the AMK Ranch in Grand Teton National Park.

The final Harlow Summer Seminars speaker of the 2014 season is Samuel Singer, executive director of Wyoming Stargazing, a nonprofit organization based in Jackson. He will present “The Extraordinary Wyoming Skies” at 6:30 p.m. at the AMK Ranch, located north of Leeks Marina. A barbecue, at a cost of $5 per person, will take place at 5:30 p.m.

Singer, who recently received his Ph.D. in science education from UW, established Wyoming Stargazing in Jackson to promote scientific literacy and to inspire this and future generations through astronomy education. His presentation will include descriptions of the many objects visible to the naked eye and with a small telescope in the dark skies of Jackson Hole, which provide an ideal setting to view planets, stars, galaxies and more.

After the talk and a question-and-answer session, telescopes will be set up to view the objects discussed during the talk.

The UW-NPS Research Center provides a base for university faculty members and government scientists from throughout North America to conduct research in the diverse aquatic and terrestrial environments of Grand Teton National Park and the greater Yellowstone area.

Wyoming Stargazing is an educational 501(c)3 nonprofit organization based in Jackson, Wyoming. It was founded by Dr. Samuel Singer, who recently received his PhD in Science Education from the University of Wyoming. After building two telescopes and establishing a small astronomical observatory at Hampshire College as part of his bachelor’s degree in physics and astronomy, Samuel went on to be recognized by NASA for an astronomy lesson plan he wrote and to build a second small observatory for the Teton Science Schools in Jackson Hole, where he now lives.

The mission of Wyoming Stargazing is to promote scientific literacy and to inspire this and future generations through astronomy education. We can’t wait to show you the rings the Saturn, the moons of Jupiter, or even an entire galaxy during one of our stargazing programs. The sky is not the limit!

Although named the AMK Ranch, this site never served as a working ranch. Homesteaders settled here in 1890. Later two wealthy families vacationed here. Majestic views of the Teton Range and Jackson Lake now serve as a unique backdrop for research and education at the University of Wyoming Research Center.

Last night at the shores of Colter Bay Wyoming Stargazing reached our 1,000th stargazer!  In just five short months since we began our programming Wyoming Stargazing has gone from hosting one program a week to hosting on average five programs a week.  In additional to our night time stargazing events we are also hosting solar astronomy events at the Peoples’ Market at the base of Snow King every Wednesday evening from 4pm-7pm for the rest of the summer.  During those events we can show you sunspots and solar flares through our specialized solar telescopes.   We also host solar astronomy at the Colter Bay Visitor Center on select Tuesday afternoons this summer.  Check out our Calendar for details.  We hope to see you soon at one of our programs! 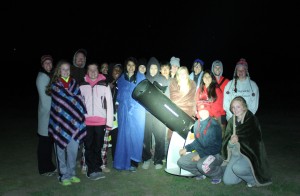 Last week Wyoming stargazing hosted two stargazing events for about 30 students from Parkway Middle School who were visiting the Teton Science Schools’ Kelly Campus.   The first program, which was held on Tuesday evening, ended at 9:30pm because the students needed get back to bed after a long day.  After an indoor presentation we went outside and checked out Mars, Jupiter, and Saturn. Neither the students nor their teachers were satisfied with just seeing the planets in the sky which was just beginning to get dark.  So, they asked if I would come back later in the week during the middle of the night in order to be able to see some deep space objects in a really dark sky.  I loved that idea.

I returned on Friday night at 1:30am to a group of about 20 of the students who were willing to interrupt their sleep for some astronomy.  They had an incredible time viewing the Trifid Nebula, the Swan Nebula, the Ring Nebula, The Hercules Globular Cluster, the Andromeda Galaxy, and of course Mars, Jupiter, and Saturn.

At about 3:30am the students were about ready to head back to sleep.  One of them stepped forward and thanked me for teaching them about astronomy and inspiring them to learn more about science.  She held out her hand, pressed two one-dollar bills into my hand and said, “this is for your organization.”  Then, every one of her classmates followed suite and handed me one or two dollars as a donation for Wyoming Stargazing.  I started to cry. Enough said.