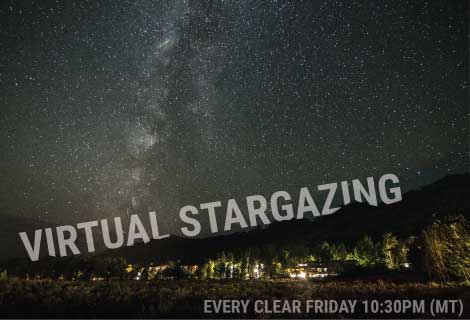 Last Thrusday Dr. Sam and Dr. Mike were invited to do a Virtual Stargazing Program with Astronomy Prof. Brian Keating and Tony Darnell of Deep Astronomy. We had a bit of technical diffuclties at the beginning, but we ended up having a great program over all. You can watch the entire program by clicking on the following YouTube link.

We’d also greatly appreciate it if you clicked here and subscribed to the Wyoming Stargazing YouTube Channel! Our goal is to have over 1,000 subscribers.

Parade Magazine selected Wyoming Stargazing’s Save Our Night Skies Campaign as the state of Wyoming’s example of an Earth Saving Project for this year’s Darth Day. They picked only one project for each of the 50 states and they picked us! Check it out!

WHAT IS OLD BILL’S?

Twenty-one years ago, an anonymous, philanthropic couple, fondly known as Mr. and Mrs. Old Bill, envisioned a collaborative event to support local nonprofits. For the first time, organizations came together in an efficient, unified fundraiser that raised awareness of community needs. Over the last two decades, more than $146 million has been raised for local organizations, and it has inspired similar events around the country.

One of the most innovative fundraisers in the nation, Old Bill’s Fun Run is also one of the most successful. In 2017, the event raised $12,168,165 from nearly 3,798 donors. Old Bill’s has brought an astounding $146 million philanthropic dollars to our community. These funds are busy feeding the hungry, supporting the sick and elderly, teaching kids to read, protecting wildlife, building affordable housing, enriching our lives through the arts and touching the lives of everyone in Teton County.

In 2019, you can give to Wyoming Stargazing beginning August 1st through 5pm on September 14th. Join us Saturday, September 7th, for Old Bill’s Fun Run on Jackson’s Town Square!

When you’re ready to donate just click on this text or any of the Old Bill’s images and then click on the “Add to Cart” text at the bottom right hand corner of the screen once you are redirected to the Old Bill’s Website. Thanks!

It’s been an exciting couple of weeks at Wyoming Stargazing. We’ve set up the Dark Sky Pavilion and Planetarium a couple of times for Madness Days at Melvin Brewing and at Base Camp for Wilderness Adventures at Snow King. We also had the great privilege to offer stargazing programs for some really amazing people including Sara Blakely the Founder of Spanx, Blake Mycoskie the Founder and Owner of Tom’s Shoes, and Usher…seriously we really did a stargazing program for Usher and his family. We had a wonderful time sharing the Cosmos with all of those distinguished guests and we look forwarded to doing that with you too under Wyoming’s extraordinary skies!

Wyoming Stargazing was featured in a NY Times article today about stargazing in the western hemisphere. Astrotourism is a rapidly growing industry and Wyoming Stargazing is honored to be a big part of sharing the Cosmos with the public. Read more…

Earlier this week our Executive Director, Dr. Samuel Singer, led Wyoming Stargazing’s 1,000th astronomy program since our very first program in March of 2014. We’ve come a long way since that first, cold, winter night at the Stilson Parking Lot. We’d like to thank everyone who has helped us along the way from folks who volunteered at just one event and to the folks that keep coming back time after time, to our amazing donors and board of directors, to the more than 20,000 people who have attended our programs, to our staff both past and present, to the concierge who help us book stargazing programs, to the people who believed in us from the very beginning and selflessly gave up their time to help us, and to the amazing community organizations that supported us over the last few years which include, but are not limited to: The Center of Wonder, The Community Foundation of Jackson Hole, the Center for the Arts, pARTners, Rendezvous Lands Conservancy, 1% for the Tetons, The Jackson Hole Travel and Tourism Board, the Wyoming NASA Space Grant Consortium, Quiznos, the Whole Grocer, Lucky’s, Elevated Grounds, Teton County Park and Recreation, and others.

A special thanks to Mike Cavaroc and Jakub Galczynski who have been helping us from the beginning and continue to do so all the time!

The 1,000th program took place in our brand new digital planetarium inside the Dark Sky Pavilion (pictured below) designed by local artist Natalie Clark and Jakub Galczynski. The facility was made possible for generous grants from the Center of Wonder, the Community Foundation and Jackson Hole, and other private donations. Thanks to everyone who made this possible.

We hope to see you at one of our upcoming events!

Want to capture the eclipse and the Grand Teton in the same frame? It’s going to be tough, considering the Sun will be at an elevation of 50° above the horizon. With a wide enough angle lens, there are a few spots you can capture the Grand Teton in the same frame as the eclipse. One of the spots is at Lake Solitude. The hike to the lake is arduous, being 8 miles one way with 2,982 feet of vertical gain. However, it will be worth the effort if you have the endurance! With practice and precision, it’s possible to get the Grand, the eclipse, and a reflection of the eclipse in Lake Solitude. For more information about this hike, or to read about the other hikes in Grand Teton National Park that you can take to get the Grand and the eclipse in the same shot, visit our store to purchase Aaron Linsdau’s “Jackson Hole Total Eclipse Guide”.

Wyoming Stargazing, along with three other nonprofits, were selected for this year’s 1% for the Tetons Video Blitz. The nonprofit whom receives the most votes this Friday night will receive a $6,000 grant from 1% for the Tetons! Please attend, enjoy the festivities, watch the short 3-5 min films, and cast your vote for Wyoming Stargazing! The weather for Friday night looks good so we’ll be offering our FREE Public Stargazing Program out on the lawn after the Video Blitz event ends.

Check out this recent interview of our Executive Director done by the JH Wildlife Film Festival: Wyoming Stargazing: Interview with Dr. Samuel Sing﻿er

Sam got underway running an indoor program to kickoff the night for the 60 or so people in attendance for stargazing just as I had come back in from putting on the final touches at the viewing area nearby. The indoor program was expected to take roughly 45 minutes or so to get people excited for the night sky as it got dark enough to view deep space objects. The crowd seemed generally receptive to the program, with plenty of Q&A, and after about an hour, we all headed outside to the driving range to see in person much of what they had just learned.

Sam and I both began aligning the two different scopes we had out and soon had people looking at the half-moon up close. By this time however, the temperature was beginning to drop a little too much to be comfortable for some people, despite the blankets we had out. After a quick glimpse of the moon, some chose to end the night there.

For those who stayed, we had a great look at Saturn next, but with the low expected to be in the mid-30s overnight, the night air was quickly approaching its target, which was too much for most people. Though blown away by seeing Saturn, the majority of people had left after seeing it. At this point, Sam and I both got our scopes aligned to the Ring Nebula which fascinated the people that were still out, but not even that was enough to entice people to stay out longer.

As the last people made their way from the driving range, we began our routine of systematically taking down the scopes and gear that was out. Sam began unplugging his scope while I began turning off the iPads that we use to let people browse the night sky digitally when they’re not looking through a scope. We were making our usual slow progress when a very unsettling sound brought our attention to the hole across the path: two sprinklers had just automatically turned on. "Uh-oh" was about all that was muttered before we ran to the most expensive gear out there to begin breaking it down. Even just a quick pass from one sprinkler would be enough to cause significant damage to our most expensive gear. We had no clue where the sprinklers were or how many were expected to go off, all we knew is we needed to get everything safe immediately. I was taking down our 20" scope, our pride and joy, faster than I ever had, knowing we were now engaged in a race against the automatic sprinkler system. There were two Shooting Star staffers with us as well, one helping to move things to safety, another frantically making calls asking why the sprinklers were on.

Of course we weren’t sure if the sprinklers at the driving range would even turn on, but seeing them across the path was enough warning. But then, on the driving range just a few dozen yards away, two sprinklers came on, just out of reach of us. They were coming, and all we knew was that our time was limited. By now I had the 20" mostly broken down and I wheeled it to safety to the path where there was a large dry section. On my way back, a sprinkler began spouting practically right where the 20" was. I immediately became soaked as I scrambled to get things out of the way: iPads; telescope gear; a battery for the scope that was still out on a table. In my own rushed pace I lost track of what the others were doing, but a few minutes later, all of us regrouped and were dripping with water from saving what we could in a safe(r) spot.

Appearing to be out of harm’s way, we evaluated what got wet and what was kept safe, and aside from one telescope battery, the things that got wet were simply chairs, tables, and blankets. Fortunately, our instincts helped us keep everything simply couldn’t get wet safe, and we were back up and running the next night after letting everything dry out in the sun. Earlier in the night Sam had remarked how much earlier it was than he was expecting to finish. That definitely worked in our favor that night.

We only have 6 days left in the Indiegogo Fundraising Campaign!  We have raised nearly $1,500, but we are hoping to raise a lot more.  Now is your chance to support our organization and to help us build a large public observatory and planetarium in Jackson, WY.  Just go to www.indiegogo.com/projects/wyoming-stargazing to contribute.