A well-known fact occured in 1492, when Christopher Columbus sailed the ocean blue. Less well-known, is how Columbus narrowly escaped death 12 years later with the aid of an eclipse.

After a long trip at sea in 1504, Columbus, his crew, and their ships were weather-beaten and poorly equipped for further sailing. Desperate and stranded, the crew sought food from the native people on the island of Jamaica. However, the Jamaicans had already seen what the Europeans had to offer: greed, disease, and insatiable appetites. Instead, the Jamaicans refused to help Columbus and left the crew to fend for themselves.

Luckily, Columbus used resourceful thinking and two manuscripts that he kept with him on his ship, originally for navigated the sea. It would also turn out that the two books would assist in saving Columbus’ life. One book was called the “perpetual almanac”, which contained a few hundred astronomical charts aiding in seafaring expeditions. The second book was an ephemeris authored by Regiomontanus which contained the prediction of a lunar eclipse on February 29th, 1504. Columbus was unsure of how correct this prediction could be, but he needed to take the risk.

A day prior to when he anticipated the eclipse, Columbus gathered the native Jamaicans together, and told them that since they had refused to hear him out, the moon would disappear the next night. To everyone’s great dismay, the following night, the eclipse occurred. Regretful of their mistake, the natives begged Columbus for forgiveness and to return the moon to the sky in exchange for food and hospitality. In Columbus’ era, eclipse prediction was still inaccurate, sometimes by multiple years. With Regiomontanus’s predictions, Columbus and his crew escaped a hostile environment and eventually were rescued by a Spanish ship later that same year.

Information obtained from this source.

How did the Earth get such large moon? What’s the difference between a solar and lunar eclipse?

Well, late tonight or early tomorrow morning. Penumbra starts at 2:15 am tonight, totality begins at 4:25 am and ends at 5:25 am, and dawn will break before the moon is fully out of the earth’s shadow next morning!

This is the second “blood moon” of the four happening this year and next, approximately one occurring every six months. So if you miss this one, just catch the next one in the spring!

The moon really will turn red during totality, as seen from the above photos from last spring’s lunar eclipse. The reason is that Earth’s apparent size is so much bigger than the sun from the perspective of the moon, but our atmosphere refracts the sun’s light to the moon so that it appears like the moon is seeing every sunset on Earth at the same time! And we see that reflected sunset light here.

For those of you in and around Jackson, if you can, GO CAMPING TONIGHT ON SHADOW MOUNTAIN!!! The angle of the setting, blood-red moon from there will be such that it will appear over the saddle between the Grand and Middle Tetons. 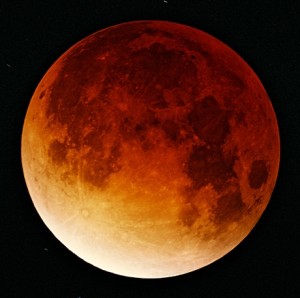 On the night of Monday, April 14th there is going to be a Total Lunar Eclipse and Wyoming Stargazing wants to help you experience it for FREE!  We’ll be setting up our telescopes at the Stilson Parking Lot as usual, about 100 yards behind the Start Bus bus stop building, at about midnight. The eclipse begins at that time and reaches totality at about 1am on Tuesday morning. The eclipse ends at about 2am. When the Moon is eclipsed there will be lots of other objects to view in the sky, such as Mars which on the 15th will almost be at its closest approach to Earth this year. We hope to see you out there at Stilson. Please spread the word!

For more information about the eclipse check out the following NASA website.

Thanks so much to everyone who has already come out to one of our free stargazing events.  We hope you’ll come to this special free event as well.

Another special thanks to those of you who have left donations for us and/or have written testimonials on our website. Your support is greatly appreciated!  It’s never too late to give us a testimonial or make a donation. If you had a good time attending one of our events, please consider clicking on one or both of the following donation and testimonial links on the Wyoming Stargazing website to show your support.  Thanks!